The wide range of symptoms seen in vasculitis reflects the potential for damage from poor blood flow to a variety of affected tissues throughout the body. For example, vasculitic damage to the lungs may cause shortness of breath and cough; damage to nerves may lead to numbness or weakness in a hand or foot; and damage to the skin may produce red spots (purpura), nodules, or ulcers. On the other hand, vasculitis of the kidneys may produce no symptoms at first but is a quite serious problem.

Vasculitic diseases can be mild or life-threatening, and either limited to a single episode, or multiple ones.

Most patients with vasculitis can be diagnosed with a specific vasculitic disease based on the size of the affected blood vessels and the organs most commonly involved (see table). However, for some patients, a specific type of vasculitis cannot be determined.

Most types of vasculitis are rare.

Arteries and veins of various sizes

Vasculitis can also be a part of several other rheumatic diseases, especially lupus, rheumatoid arthritis, and Sjögren’s syndrome. However, most patients with vasculitis have none of these underlying problems. Vasculitis is not hereditary.

A few forms of vasculitis are relatively common and affect particular groups of people. For example, Kawasaki’s disease is only seen in children, and Henoch-Schoenlein purpura is much more common in children than adults.

On the other hand, giant cell arteritis occurs only in adults over 50 years of age, and becomes more common with older age.

Most forms of vasculitis are rare and affect persons of both sexes and a broad range of ages. 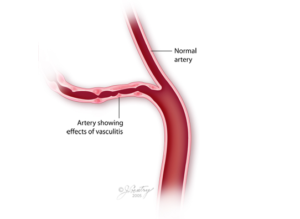 How is vasculitis? diagnosed?

Most patients with vasculitis can be diagnosed with a specific vasculitic disease based on the size of the affected blood vessels and the organs most commonly involved.

Physicians consider the possibility of vasculitis when a patient has symptoms, physical exam signs, and/or laboratory tests suggesting damage to one or more organ systems in the absence of another clear cause.

A few forms of vasculitis, such as Behcet’s disease and Kawasaki’s disease, are usually diagnosed on the basis of a collection of clinical findings rather than biopsy or angiography. Some blood tests are so suggestive of a particular type of vasculitis that a positive test can sometimes allow for a diagnosis without biopsy or angiography. The most useful of these tests is for anti-neutrophil cytoplasmic antibodies (ANCA); a positive ANCA test can be extremely helpful in establishing a diagnosis of Wegener’s granulomatosis, microscopic polyangiitis, or Churg-Stauss syndrome. Other laboratory tests are important for showing damage to internal organs but the tests are not enough to establish a diagnosis of vasculitis.

How is vasculitis treated?

Glucocorticoids (prednisone, prednisolone, or other similar drugs), often referred to as “steroids,” are an important part of therapy for most forms of vasculitis, but dose and duration vary with the severity and chronicity of the disease.

Other immunosuppressive agents are used either because the disease is so severe that glucocorticoids alone are insufficient treatment, or because the long-term side-effects of these other drugs are less severe than those of glucocorticoids (“steroid-sparing”). Cyclophosphamide is the strongest of these immunosuppressive drugs and is used to treat the severe disease that endangers vital organs. Methotrexate, Azathioprine, and other drugs that are used more widely in treating other rheumatic diseases are also used to treat non-life-threatening vasculitis and are useful as steroid-sparing agents.

New drugs that are developed for treating other autoimmune and inflammatory diseases are often subsequently investigated in vasculitis. Plasma exchange (plasmapheresis) and intravenous immunoglobulin (IVIG) are sometimes used in severe cases of particular forms of vasculitis that are thought to be caused by circulating autoantibodies.

Vasculitis can be a temporary or a life-long problem, and symptoms and complications of vasculitis vary from being merely annoying, to disabling, to life-threatening.

Physicians often focus, with good reason, on preventing permanent damage to critical organ systems such as the lungs, kidneys, brain, and nerves. It is crucial to work to prevent death and long-term disability from vasculitis, but other issues often trouble patients with vasculitis more on a day-to-day basis, including fatigue, pain, arthritis, nose and sinus problems, and many other problems. Side effects from medications, especially glucocorticoids, can be particularly troubling.

Vasculitic diseases are inflammatory conditions that often require treatment with immunosuppressive drugs including glucocorticoids.
Several different types of vasculitis have been defined, most of which are rare.
Diagnosis of vasculitis usually requires either biopsy of affected tissue or angiography, depending on the size of the affected blood vessel.

The rheumatologist’s role in the treatment of vasculitis

The American College of Rheumatology has compiled this list to give you a starting point for your own additional research. The ACR does not endorse or maintain these Web sites, and is not responsible for any information or claims provided on them. It is always best to talk with your rheumatologist for more information and before making any decisions about your care.

Written by Paul A. Monach, MD, PhD and Peter A. Merkel, MD, MPH and reviewed by the American College of Rheumatology Patient Education Task Force.

This patient fact sheet is provided for general education only. Individuals should consult a qualified health care provider for professional medical advice, diagnoses and treatment of a medical or health condition.